The McMaster-Syracuse MCM made waves at Currents 2012, as professional communicators from across Canada gathered to learn, debate and network at the Fairmont Empress in Victoria’s inner harbor.

I attended, as MCM Program Director, as did Dr. Terry Flynn, as MCM Lead Professor. I spent most of the conference at the MCM booth, meeting many great people and getting more and more excited about the brilliant future of professional communication and communications management in Canada. I was thrilled to see a great deal of interest in the MCM program, which veteran professional communicator, Mr. Derek Pieters, APR, FCPRS has called “the gold standard” in communications education in Canada. It is particularly encouraging to see our MCM graduates succeeding in boosting their careers across Canada.

Terry participated in the panel discussion moderated by Heather Pullen on “How to Overcome a Disclosure Dilemma – A Framework for Building Trust and Managing Expectations in Times of Uncertainty.” Also participating were Dr. Josh Greenberg, associate professor of communications at Carleton University and Jeff Valentin, APR, MBA, vice-president, communications, Hamilton Health Sciences. They had a very lively discussion based on a crisis that occurred at a private health clinic in Ottawa where several patients were exposed to HIV  and hepatitis. The discussion took off from there and the hour flew by.

I must say that since taking over as MCM Program Director from my colleague and program founder, Dr. Terry Flynn in January 2012, I have been very pleased to see interest in the program growing steadily. It has also been very gratifying to hear from so many practitioners across Canada, the United States, the United Kingdom and even farther places such as Brazil, Nigeria and Argentina, that the MCM is considered the market-leading credential in professional communications management in Canada.

As has been our tradition for the past several years, the MCM program sponsored the annual Diana and Charles Tisdall Lecture in Public Relations Education at this year’s CPRS Conference. The invited speaker was Mr. Lyndsay Gordon, President and CEO of HSBC Canada. He gave a very thoughtful lecture on how the world of finance has always been dependent on reputation and branding to build trust and credibility among customers and business partners. He discussed the fact that communications has become a central component of banking since the crisis that began in 2008 that saw the fall of such giants as JP Morgan in the United States and Northern Rock in the United Kingdom. In an answer to a question posed by Victor Vrsnik of SPIRE Communications, Mr. Gordon expressed the thought that, within five years, most financial institutions would restructure their governing boards to include a Vice-President Communications. He said it was inevitable. I agree.

As the world becomes more profoundly interconnected through digital media, smart phones, smart televisions and other wired devices, one can only see the importance of communications management expanding as a core organizational function that requires a seat at the executive decision-making table.  That means massive opportunity for professional communicators to advance in senior management roles. What that also means is that professional communicators need to invest in an education that covers the beachfront of cutting edge communication and public relations theory, research methods, social media management, law and ethics, reputation and branding, coupled with core business knowledge in marketing management, strategic management, organizational behavior, financial management and accounting.

The MCM was designed to provide this education, and it is working for the students and alumni of the program. I am so very proud to serve as academic director for a program in whose mission I believe so strongly. 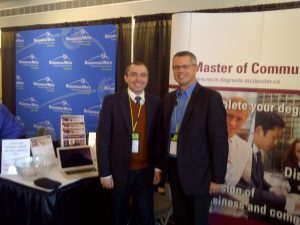